I remember May 2010. Not only because it was the last time since the Montserrat Soufriere Hills Volcano’s dome collapsed, triggering a pyroclastic flow which completely covered the remnants of W.H. Bramble Airport. I remember May 2010 because I rode shotgun in a unique airplane.

This was an airplane which had a hole in the underside of it. Mounted and fitted in the hole was a camera. Not just any camera, it was a camera with unique specifications, designed for taking aerial photographs. After monitoring the weather for days and looking for a “space in the clouds” as it was termed, the mission began by travelling over to the neighbouring island of Antigua. I recollect that on the day of the flight we had to have all hands on deck, pushing the plane out of the hanger.

The flight plan was scribbled on a piece of paper, which the pilot displayed in front of him for the duration of the exercise. Riding shotgun, I took in the amazing vista of being up and above my beautiful island of Montserrat. We flew in an easterly to westerly pattern, for a number of days covering the island with images from the sky. The technician constantly gave instructions to the pilot to ensure that we were having a certain percentage of overlap in the images as they were being taken. Furthermore, the post-processing of the images was a lengthy one, as they had to be cleaned, corrected and geo-referenced in order to be used appropriately. After about six (6) months we finally had the complete set of imagery in our hands.

So much has evolved in eight (8) years. Aerial photographs are now been captured by Unmanned Aerial Vehicles (UAVs) or Unmanned Aerial Systems (UASs) commonly known as drones.

Here are four (4) reasons why I think drones should be used in Geographic Information Systems (GIS) and mapping:

Reduction in Cost – Drones provide a less costly way of acquiring remotely sensed data than the traditional method of a plane and pilot. There would be no need to need to hire a skilled pilot and pay exorbitant fees for the use of an aircraft and rental of a hanger, if drones are used. Drones provide an acquire once, use many times option, thereby significantly reducing cost.

Reduction in Risk – Although I thoroughly enjoyed the vista and scenery provided from the plane, there was an evident risk to human life. As the term “unmanned” suggests, drones reduce the risk to human life, as there is no man on-board. Moreover, drones do not possess human characteristics of becoming tired or getting distracted. These qualities do prove advantageous when collecting large amounts of data.

Reduction in Time – Drones provide a significant reduction in the time taken to acquire the imagery and the time taken to process the acquired image. Instead of taking months to see the output of one’s work, this is made available instantaneously as the data is being captured. Adjustments can also be made while flying, because the data can be visualized as it is being collected. Drones nowadays come equipped with global positioning systems (GPS) which allows for autonomous flying of pre-planned flight paths, thereby saving time in the field.

Increase in Quality – The output of drone images are becoming increasingly better. Drones can get closer to a scene than a plane can, thereby allowing for greater quality and detail in the imagery which is being captured. Appropriate specifications for the camera which is mounted on the drone, is key.

As reported, about a week after the May 3rd 2018 eruption of Hawaii’s Kilauea volcano, drones were deployed and started flying over the widening lava flows. This is thought to be the first time drones were being used to capture critical images and data above a volcano during emergency response efforts. (https://statescoop.com/amid-hawaiis-volcanic-eruption-drones-and-maps-revealed-hidden-fissure).

Utilizing newly acquired information and comparing it with pre-disaster information, gives a clear understanding of what transpired. Imagery collected from drones becomes a powerful resource once it is fed into a GIS. In emergency response situations, drones provide a quick overview with reliable visuals without putting first responders at risk. 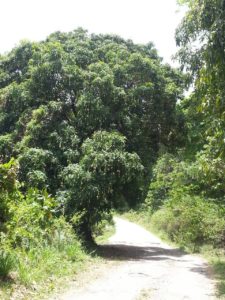 When was the last time someone gave you directions to get to a party at a friend’s house? They would usually say something like this. “Do you know where Mr. T lives? Well, when you pass by the big hairy mango tree in the corner by Mr. T’s house, turn left and follow the road until you meet the bridge crossing in the ghaut. After you pass the bridge, take the next right onto the dirt road. You will see an orange house with a white fence. Keep going along that road, then you will see a white, upstairs and downstairs house with red shingles on the roof. The party will be by my friend Mr. D, who lives in the blue house, two houses down from there”.

The reality is, that in the absence of proper addressing systems, especially in the Caribbean, we rely on directions like these from our friends. Thankfully, however, even without noticing, we all use geospatial data.

By answering the question, “Do you know where Mr. Z lives?”, you are being given a moment to find your point of reference for orientation. All directions that follow are then referenced to this known location.

Similarly, the geographic location of real-world features on earth (natural or constructed) is what powers geospatial data. By utilizing the appropriate co-ordinate system, these locations can be displayed in the right location on a map.

Welcome to LRR Geospatial Consultancy. Over the past 15 years, I have been a passionate leader of Geographic Information Systems (GIS). I am keen to share my knowledge on the applications and use of GIS and get everyone as excited as I am about this amazing technology and its use in making our lives much more improved. This forum provides me with the opportunity to share my experiences, interests and applications on the use of GIS with you. Step into my world and join me on this SPATIAL journey!